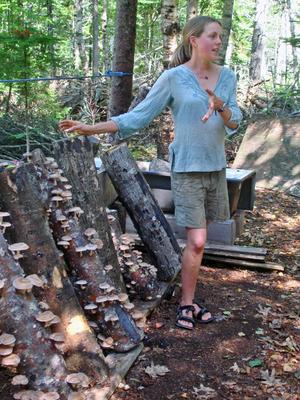 Anneli Carter-Sundqvist explains the system she uses to grow the shitake mushrooms supplied to area restaurants.

Hosts Dennis Carter and Anneli Carter-Sundqvist opened their home and hostel on July 18 to demonstrate homesteading techniques and lay their lifestyle bare before a group of curious visitors.

The Deer Isle Hostel accommodates guests from May to September. The rest of the year the couple live in a small cabin on the grounds. The tour and talk, titled “Homesteading in the 21st Century,” was sponsored by the Island Heritage Trust and covered a range of hands-on, practical skills, from the initial building of the hostel to day-to-day, year-round tasks.

The entire operation is a labor of love and an ongoing project for the couple, who met at a hostel in Georgia. Since opening its doors in 2009, each year yields new outbuildings, improved methods, and increasing recognition. The latest nod of approval came from Mother Earth magazine when the Deer Isle Hostel received their “Homesteader of the Year” award.

As visitors gathered around, Carter demonstrated the granite-splitting technique he used to cut the rocks used in the hostel’s foundation and cellar walls. The building is a replica 17th century house, built by hand. After helping his father and grandfather on carpentry jobs, Carter went on to work as a stone mason and wood worker. Primarily self-taught, he built the hostel using the knowledge and techniques gleaned from the book The Framed Houses of Massachusetts Bay 1625-1725 by Abbott Lowell Cumming. The book comprised part of the tour, and sat on the kitchen table amongst an assortment of antique tools used in the hostel’s construction.

Carter-Sundqvist led the walk through the sizeable gardens, which, utilizing preservation techniques, produce food year-round. She said with a garden so substantial it is often assumed they are growing to sell produce, but they focus on growing varieties that will store well.

“We just grow so we can keep it,” with the exception of garlic and shitake mushrooms, which she sells to local restaurants.

The hostel is off the grid, and runs on eight solar panels with back-up batteries. There is no freezer, refrigerator, or back-up generator. Hot water for (outside) showers is supplied by a pipe coiled through a compost pile; an idea gleaned from a YouTube video. Food is stored and preserved in the cellar, in cans, jars, and wooden boxes full of damp sawdust. In the winter, the couple bathes in the kitchen of their cabin, using water heated on the woodstove.

It’s a far busier place than it was when Carter first purchased 17 sleepy acres of woods with a business partner on Tennis Preserve Road when, he recalled with a laugh, “It was quiet, so I started a hostel, ‘cause it was lonely and quiet.”

For more information on the hostel, to plan a visit, or find out about future events, go to deerislehostel.com. 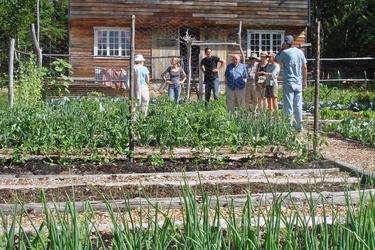 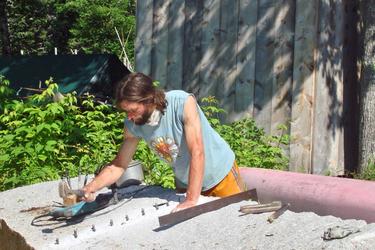 Dennis Carter demonstrates the granite-splitting techniques used by the ancient Greeks, which were resurrected centuries later in pre-industrial New England, and used in the building of the hostel. 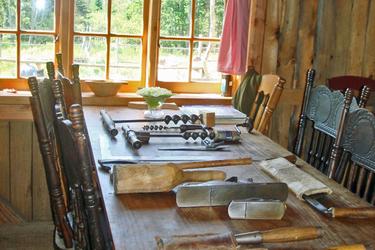 The antique tools used in the construction of the hostel sit on the kitchen table. 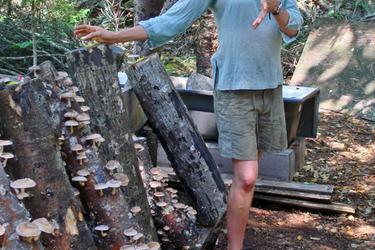 Anneli Carter-Sundqvist explains the system she uses to grow the shitake mushrooms supplied to area restaurants.