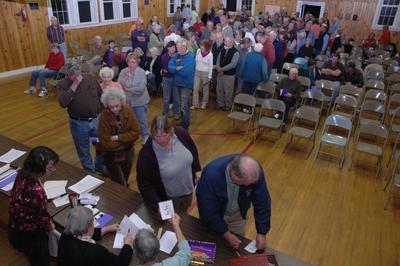 In a turnout more than twice the size of recent annual town meetings, Brooksville voters enacted a cell tower moratorium on Monday, October 4.

The vote gives Brooksville approximately six months, and possibly more time, to come up with an ordinance governing where and how cell phone towers can go up within the town.

It comes after cell phone companies have almost completed one tower there, have a second well underway and possibly three or more under contract. The vote means Brooksville may now have to address whether the new moratorium applies to projects under contract.

But the vote is not likely to affect the completed tower or the one that is almost finished.

The ordinance approved by the voters was recommended by two selectmen. The tally was 81 in favor and 71 opposed. A competing moratorium ordinance, drafted by Bar Harbor attorney Lynne Williams for a number of Brooksville residents, was defeated with 54 votes in favor and 97 opposed.

The special town meeting at the Brooksville Community Center in Bucks Harbor lasted nearly three hours. It ended with an 81-30 vote directing the town’s ordinance review committee to draft an industrial wind turbine regulatory ordinance that will dictate how and where turbines can go up in Brooksville.

Robert Vaughn was elected moderator as the first item of business.

Most of the discussion on the competing moratoriums was about their differences, rather than about whether to have a moratorium.

Selectman John Gray, speaking for himself and Selectman Darrell Fowler, said they prepared their moratorium in response to an informal petition initiated in early August by Town House Road residents who opposed a 190-foot tower that has since been almost completed near their road—on land owned by Selectman Richard Bakeman.

(Bakeman, who previously recused himself in this matter, was seated in the front row during the meeting.)

Gray said the moratorium supported by the selectmen would be retroactive to August 4 on projects that were “pending” on that date.

He said the second moratorium ordinance was retroactive to July 1 on projects not completed and operating on that date.

“The town would have legal trouble on this [second ordinance]” Gray said.

Gray has argued that the second ordinance might apply to the tower on the Bakeman land, thereby setting the town up for a legal fight with its owner, Global Tower Partners/Assets.

He has also expressed concern over its applicability to a 250-foot tower U.S. Cellular Corporation is building on land owned by Jerry and Edna Andrews. An access road and site preparation work are well along on that tower.

However, at a September 23 hearing, attorney Lynne Williams said her ordinance would probably not apply to the two towers under construction. (See September 30 issue of The Weekly Packet.)

Proponents of Williams’ ordinance said they feared the first ordinance will not stop towers under contract. That concern centers on the first moratorium’s exemption for towers “pending” as of August 4 and a lack of definition for the word “pending.”

Lake Larson asked Gray how many residents currently have contracts with tower companies. Gray said he was not sure, but that he had heard of “at least three.”

Moderator Vaughn acknowledged the lack of a definition for “pending” in the first moratorium and the possible uncertainty about whether it would apply to those with contracts. He suggested that a test for whether something is “pending” might be whether a large amount of money is at risk if the moratorium applies.

Joan Holmberg said she favored the second ordinance’s “in use” wording which she said is “much more concrete” than “pending” in the first ordinance.

The moderator instructed voters that they could vote for both ordinances, and that if both were approved, the one with the greater number of yes votes would be enacted.

The paper-ballot voting on the first ordinance took nearly half an hour, as voters came to the front of the hall to have their names checked on the voting list and received a ballot with yes/no boxes printed on it. The counting, done by ballot clerks Judy Lebel and Audrey Peasley, with deputy town clerk Doreen LaFerriere, took less than ten minutes.

The second ordinance was brought to the floor after the result of the first vote was announced. In the discussion, some of the same concerns, both for and against approval, were raised again.

Also, John Ashmore, identifying himself as a ham radio operator, expressed his concern that the moratorium described in the second ordinance would impact his rights because of the ten-foot antenna limitation.

Voting on the second ordinance, which was defeated 54-97, took about as long as for the first ordinance.

With one of the moratorium ordinances enacted, the ordinance review committee has the task of preparing a regulatory ordinance within the next 180 days. The selectmen have the option of extending that another 180 days after holding a public hearing.

Debate on the last article, to have the ordinance review committee draft an ordinance regulating industrial wind turbines, was short. There were questions on its applicability to home turbines, and its lack of a deadline for the work to be completed. The vote on that article was 81-30, with some having left before the vote.