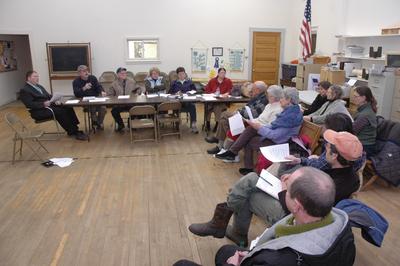 Planning board members listen to a question during the hearing on the wind power ordinance. At the table, from left, are volunteer attorney Mike Harman, planning board members Dana Willis (chairman), Robert Tapley, Liz Snow and Judy McKay, and Code Enforcement Officer Judy Jenkins. Photo by Jonathan Thomas

The Penobscot Planning Board held a public hearing on its newly drafted “Wind Energy Systems Ordinance” during the December 7 meeting. Nine residents were present to offer comments and ask questions.

The board also approved final changes to a draft communications tower ordinance and scheduled a hearing on it for the January 4 meeting. Copies of that ordinance will be made available at the town office.

The seven-page wind power ordinance would regulate the location, setback, height, and allowable noise levels from wind turbines if approved at town meeting. It would also require a yearly renewable bond to cover the cost of removal of a tower if it were abandoned and provide for the consideration of negative visual impacts. The ordinance also lays out a method for a neighbor to complain about noise level violations and have them investigated.

The height limit is 100 feet as measured from the ground to the highest point of the top of a blade when vertical.

By comparison, the three turbines on Vinalhaven are each rated at 1.5 megawatts (1,500 kilowatts). The towers are 262 feet tall, with 124-foot blade turbines, so the total height to blade tip is nearly 390 feet.

Board member Liz Snow explained that the ordinance did not make provision for industrial wind farms because many felt that they would be incompatible with current land uses in Penobscot. She said that a 50-kilowatt system on a subdivision lot could easily generate electricity for eight to 10 homes.

A variety of questions and concerns were raised during the hearing. Rich Abbott was concerned that an individual wanting to use wind power to generate electricity for home use would find the application procedure and fees too expensive to be practical. Chairman Dana Willis and Snow assured him that the ordinance was designed to be flexible and have “wiggle room” for small users.

Nate Aldridge, who said he deals with sound issues as a teacher at the University of Maine, noted the difficulty in making consistent and accurate sound level measurements. The ordinance places a limit of 35 decibels (with some exceptions) beyond the boundary of the property where the wind turbine is located. It also states that there shall be no additional low-level sounds beyond the pre-construction level.

Maggie Williams thanked the board for not including a provision for industrial size turbines. She asked several questions about procedure, such as whether abutters would be notified when an application is submitted.

Williams and others expressed concern about whether too much discretion would be left to the board on issues such as determining whether a project would have a negative visual impact on nearby properties.

Attorney Mike Harman, who assisted the board as a volunteer in drafting the ordinance, recalled that the board had discussed these matters at length. He agreed that some of the standards were subjective, but said that planning boards frequently were called upon to make such decisions.

Harman said that the board had started by reviewing ordinances from other towns that were 40 to 60 pages in length, with very detailed standards. He said that such ordinances could be subject even more to expensive legal challenges, and that he supported the board’s decision to reduce the length to only seven pages.

Before the hearing began, board members approved a building permit for Marty Johnson to build a house (map 5, lot 28), and for Annaleis Hafford to build a garage (map 9, lot 37-1).